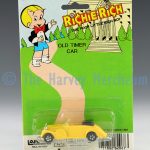 I spent a long time debating what item I wanted to showcase first. Part of me wanted to post something relatively rare or expensive, to go for the “Wow!” factor. Part of me wanted to post something very common, so that if readers were inspired by the post, they could easily acquire one for themselves. In the end, I decided to post the items that inspired me to create this website in the first place: the Richie Rich Old Timer cars.

I had one of these cars in my collection when I posted my list to the Richie Rich Yahoo group (as mentioned in my Mercheum history, part 1 post). The response I got mentioned three variants. I started looking more closely at pictures on auctions and such, and did find two other variants. Then I found a third…

As far as I know, there are only four variants of the Richie Rich Old Timer car. They all use the same backer card, including product number and UPC, and the same blister. The easiest way to tell the difference between them is to look at the bottom of the car itself if you can. The make and model of the car they were representing are cast into the bottom plate, along with the scale. What is strange is that all four cars are in different scales, possibly to make them fit into the blister better. As a former model railroader, I can tell you how annoying differing scales are!

I believe the 1/68 scale Rolls Royce convertible with its top down is the most commonly available variant, and so that is the one I am starting with. To view the exhibit permanent page, follow this link: