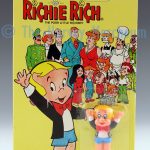 The early 1980’s were a good time for Richie Rich merchandise. Today I present to you the first of a series of non-poseable figures made by Dimensions for Children (DFC) in 1981. DFC was best known for large playsets of molded figures. To my knowledge, these figures are the only items DFC ever produced for Harvey.

I have seen these figures alone or in sets, and loose as well as on card. They can get quite pricey. What I find most interesting about these figures is the back of the backing card. It is printed in full color, and the same image was used for all the figures. The picture depicts Richie Rich saying “COLLECT ALL MY FRIENDS!”, and then has a list in the lower-right corner. If you count the “RICHIE RICH, the POOR LITTLE RICH BOY” as the first entry in the list, there are a total of thirteen different characters listed. The additional twelve are:

Of these, I have only seen Richie, Gloria, Dollar, Reggie, Cadbury, and Irona. Were the others ever released? If you know, please leave a comment below!