No new exhibit this week, I need some time to photograph some of my recent acquisitions. I have a stockpile of photographs for exhibits, but I am very eager to share a couple of new items in particular, including one I have not even received yet!

In the meantime, I have redone the text on the home page about guest submissions. This would be a great time to send in some photographs of your own! 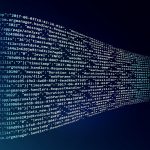 There were several pieces of information I wanted to track beyond what was on the items themselves. I added data elements for an “item type”, an outer packaging description, and a list of characters depicted. Item type will be refined over time as more exhibits get posted. With outer packaging, I was originally going to get very detailed, using industry terminology where known, but I decided to keep it simple.

I also needed some way of identifying the exhibits, and decided on an exhibit number. I came up with a simple variation of an accession number. I used the two-digit year the exhibit was posted (rather than acquired), followed by a period, followed by a sequential number for exhibits posted that year.

I finally finished reading Tony Isabella‘s book, “1000 Comic Books You Must Read”. It took me much longer than I anticipated, because I found the print very small and my eyes getting tired. It was well worth the effort though, as I learned about many titles I had never heard of before. And while I am not sure I agree with every issue, I was pleased to note that there were a few Harvey books in the mix. At the end of the book, there is mention of a related website, check it out! 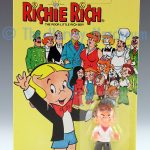 Today we conclude the DFC figures with Richie’s mean cousin Reggie. While Irona might be my least-favorite character in Richie’s universe, Reginald Van Dough Jr. might be my favorite, because he serves as a warning as to what Richie might have been.

While designing a logo for the Harvey Mercheum website might have been challenging for me, one task I found easier was deciding what data elements I wanted to present for each exhibit. I went through my whole collection, and compiled a list of possibilities. It turned out to be a fairly short list: the item’s name, product number, UPC, manufacturer, country of origin, copyright date, copyright holder, and statement of intended age range. I decided to track all of these elements, and to copy them exactly as they appear on the packaging. It is these elements that I need for guest exhibit contributions. If I cannot read the information from the pictures provided, I will have to follow up with the contributor and request it. 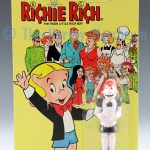 My car problems have been resolved, so on with the postings! Next up is the Rich family robot maid, Irona. I will admit that Irona is probably my least favorite character in the Harvey universe. I especially dislike her portrayal in the Richie Rich’s Christmas Wish movie. I also dislike her in one of the Richie Rich animated television series, where she could transform herself into airplanes and such.