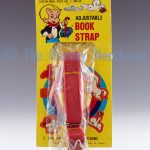 Summer gets shorter every year. It is hard to believe it is almost time for children to go back to school. School supplies are very common items to feature popular characters, and Harvey characters were no exception. While today’s exhibit is not particularly old, it is rare in that I have only seen this one. It is also fairly unusual in that, by 1982 when this item was made, people did not generally use book straps. I know I used a backpack to carry my books, and everyone I knew did as well.

All of the exhibits featured to date were legitimately produced under license from Harvey. I am fairly certain today’s exhibit is a “bootleg”, or unlicensed, product. One of the key factors leading me to this conclusion is that no manufacturer is credited. The purpose of the Harvey Mercheum is to feature merchandise depicting Harvey characters, not to decide whether royalties were paid or should have been paid on the sale of said merchandise.