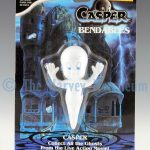 As I mentioned previously, I had a great time at ToyConNJ, and acquired a couple of Casper items for the permanent collection. I am featuring two of them today.

The first is from a vendor named Sissy. She had a small stack of Casper story records and books, which I purchased. I told her about this website, and she said she had one other item that might interest me.

She pulled out a marble, large enough to be a shooter, with Casper painted on it. She said the vendor she bought it from had lots of marbles, but the others were all super heroes, this was the only Harvey character in the lot. It is obviously unlicensed, but I like the way the haunted house is depicted behind Casper. I must apologize for the quality of the picture, this item exceeded the macro capability of my lenses. I would also like to note that while the Old Timer Cars had the most interpretive information possible for an exhibit, this exhibit has the least.

While the marble may be unlicensed, this next item was certainly licensed. In fact, a lot of merchandise was licensed for the 1995 live action Casper movie. It is easy to identify this merchandise because it features the restyled logo with Casper peeking out from behind his name. I purchased this particular item from a vendor named Jerry, and I might have to heed the advice on the package to “Collect All the Ghosts”. What I find most unusual about this figure is that is was made by Tyco. I associate the Tyco name with model railroads and slot cars, not rack toys.