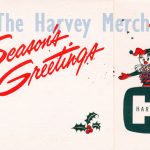 There are several items in the Harvey Mercheum permanent collection which are not merchandise, but which I want to share anyway. Several of these items are bits of Harvey corporate culture, which would not have been available to the general public but which have found their way into the collectibles marketplace. I shall present these items as posts but not exhibits.

With the holiday season upon us, I felt it appropriate to share these Harvey Comics corporate greeting cards. They are not dated, so they could be given out for several years, but I would guess they are from the early 1950’s based on the characters depicted. The first is very simple and elegant:

It is hard to tell from the scanned images, but Joker has some glitter glued to him. The second card is on shiny silver paper:

These cards came from Hake’s Americana & Collectibles, and as of the time of writing this post, there are more of them still available. I would like to close today’s post with a quote from Ted Hake, written in 2012 in an article entitled “Collecting Character Toys”: