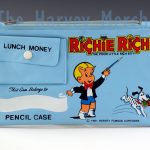 As I mentioned previously, the items that sparked my interest in photographing and documenting as many examples of Richie Rich (and later all Harvey) merchandise as possible were the Larami Old Timer Cars. Larami used the same part number for all the variants, making it more difficult to determine how many variants were made. For example, if the four I have found were numbered 1, 3, 4 and 5, that would be strong evidence that a variant numbered 2 was produced. Of course then the question would remain whether there was a number 6…

The problem becomes worse when there is no part number, and worse still when there is no manufacturer identified! Such is the case with the yellow and blue pencil cases. I acquired both cases from the same seller, and contacted the seller as to whether they had any other colors. They did not, and had not seen any other colors. I felt there should be a red, or maybe a green version, and so continued looking. What I found surprised me! Not another color, but another style, a “deluxe” model if you will, with a lunch money pocket and a place to write your name. This one even still had the foam packing insert. Click on the link below to view this exhibit, and remember to click on the images to enlarge them!