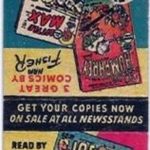 Happy 4th of July to my fellow Americans! Back in December, I posted a matchbook advertising Harvey Comics. By February I had seen four others, and asked if anyone could contribute photos. Comics fan Scott Carmody has answered the call, with not just four, but five matchbooks! I have posted each as its own exhibit, and renamed mine the “First Love Illustrated variant” to differentiate them.

I once again turned to the cover galleries on the Grand Comics Database to research the comics depicted on the matchbooks, and was able to identify all of them. Scott had mentioned that he felt the matchbooks were from 1949, and he was correct. All of the comics depicted were from between September and November of 1949 (the one posted previously was August and October). It is beginning to seem that Harvey did not continue the practice of using matchbooks for advertising for very long.

The main image on the first of the new exhibits is Joe Palooka Comics #38 from November of 1949. The two issues on the back are Humphrey Comics #7 and Little Max Comics #1 from October of 1949. Here is the exhibit:

The fourth exhibit is unusual in that a book is offered as well as two comics. The comics are Fun Parade #43 and Hello Buddies #43 from Fall of 1949:

The final exhibit is also unusual in that only one comic is featured, Black Cat #20 from November of 1949:

This concludes my guest exhibit contributions for now. If you have any Harvey merchandise you have been considering submitting, this would be an excellent time to do so. Remember, submission is easy: just use the Contact the Curator form to let me know what you have!