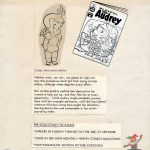 I had mentioned back in December that there are bits of Harvey corporate culture in the permanent collection which would not have been available to the general public but which have found their way into the collectibles marketplace. I was recently reminded that it has been a while since I posted any of these, so today I would like to share a “mock-up” or “paste-up” of an advertisement promoting Playful Little Audrey. The copyright beneath Audrey is 1961, so that is probably a good estimate of this piece’s age.

The comic strip PVP recently made this joke, but there is some truth there. It would be hard for today’s computer generation to imagine, but the “cut” and “paste” concepts used in word processing or image editing programs used to be much more literal. For anyone interested in how design used to be done, Speider Schneider wrote an excellent article back in 2012:

Design before computers ruled the universe

It is hard to tell from the scan, but this ad is six pieces of paper cut out and attached to a sheet of clear plastic. The plastic is wrapped around what looks like a sheet of Harvey letterhead. One of the interesting things about this piece is that the different bits of paper are aging and yellowing at different rates.