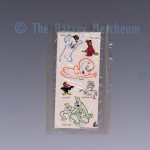 I found a moment and wanted to share one of the more unusual Casper items in the permanent collection. It is actually two items, two sheets of stickers, sealed in bags. What makes them unusual is the way they are packaged: it leads me to believe they might have been some sort of promotional item, perhaps in a box of cereal? The Ralston Purina Company introduced Sugar Chex Cereal in 1970, featuring Casper on the box. Could these have been the “free prize inside”?

The other unusual feature of these stickers is the characters depicted. I am a fan of Richie Rich, and most of my knowledge of Casper and his gang comes from the Richie Rich & Casper stories. That being said, I have never heard of “Mr. Wizard”, “Cris Crow”, “Witch Weevil” or “Kitty Cuddles”. I know Wendy’s aunts were witches, but I do not think any of them were named Weevil. And can anyone tell me if the cat on the cover of Casper, the Friendly Ghost #33 is Kitty Cuddles?

Here are the exhibits, enjoy!