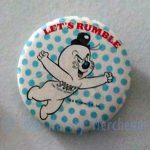 I had meant to start posting these sooner, but I caught the sore throat and cold that is going around and it wiped me out. At the end of January, there was a flurry of activity on the Harvey Comics Facebook group about the various pins made featuring Harvey characters. While I had started posting about pins on National Pin-back Button Day, rather than let the wonderful submissions go by, I asked for and received permission to post the pictures as exhibits. This is why this website exists, and I feel that now, almost two years in, the Harvey Mercheum is starting to fulfill its mission.

I am starting the documentation with five of the pins that were featured that are not already part of the permanent collection. The first three are from Mark Arnold, and I was surprised to find that one of them is the first exhibit posted featuring Little Audrey. I am also confused as to why Casper is riding what appears to be Wendy’s broomstick when he can fly on his own:

Casper on a broom pin

The next two are from Facebook group member Bart Bush, and one of them is the first exhibit featuring Buzzy the Crow:

Stay tuned for more great pins from the group!