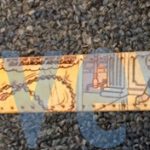 As promised, today I am very excited to feature an exhibit of one of my most sought-after items! A friend of the Mercheum that wishes to remain anonymous sent me a series of pictures of the very rare Richie Rich belt. I did my best to stitch them together for the exhibit. This is only the second example of this belt I have ever seen. I believe the reason it is so rare is that, rather than being sold in stationery or toy stores as most merchandise would have been, you had to cut a coupon out of Harvey comics and mail away for it. I must say that I am a little disappointed upon inspecting the belt closer. It seems there are only a couple of images used, and they do not form a complete story. Then again, it would be strange to have people asking you if they could read your belt!

I believe other Harvey character belts were also available for mail order. If anyone has any of the other belts and would like to share pictures, or if you have one to sell, please use the Contact the Curator form to let me know!