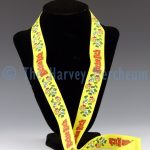 If you have been to Walt Disney World since 1999, you might be familiar with “pin trading” and the website PinPics. These are not the round pin-back buttons I featured previously, they are thick shaped metal painted with enamel. They do not have a safety-pin style fastener, they have a short straight pin with a back like a tie tack. They are typically sold on a backer card like jewelry, along with lanyards to attach them to. Much as I have tried, I have not found a word or phrase used to describe this style pin as opposed to pin-back buttons, other than just “pin”. If anyone knows what to call them, please leave a comment below!

There was a company called Pop Culture Pin Trading Co., Inc. that made this other style of pin featuring characters from pop culture, including Harvey characters. Unfortunately, I found out about the company after they had gone out of business. I was able to browse their website before it was taken down, and saw a couple of Richie Rich pins, including one of a cover I am fond of, Richie Rich # 17. I am very interested in obtaining these pins for my personal collection. If you have one you are willing to sell, or have information on where to buy them, please use the Contact the Curator form to let me know!

While I do not have any of their pins, I do have a lanyard featuring Richie Rich that Pop Culture released to put their pins on. I would assume they made lanyards with other characters, but have not seen them. If you have a lanyard with a different Harvey character, again please use the Contact the Curator form to let me know. Here is the exhibit for the Richie Rich lanyard:

Fortunately, Harvey Comics Facebook group member KB Chuck Hines posted several of the pins back in January, and allowed me to share his pictures. Here are Casper, Wendy and Spooky:

He also had two convention-exclusive pins from the 2008 and 2009 Mid-Ohio Con:

Thank you for sharing these awesome pins KB Chuck Hines!