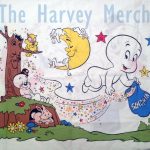 I have mentioned before that the Harvey comics merchandise produced actually appeals to a wide variety of collectors. Recently, Facebook user and vintage fabrics enthusiast Kimber Byars acquired a Casper pillowcase, and came to the Harvey Comics Facebook group to find out more about it.

Mark Arnold identified it as part of a set offered in the early 1970’s through the comic books, and provided a scan of the advertisement:

Kimber has graciously allowed me to feature the case as an exhibit, and even provided better photographs of the two sides. The photo I marked as side 1 matches the image shown in the advertisement above. Enjoy!