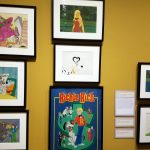 I was fortunate enough to be able to visit the new Hanna-Barbera exhibit at the Norman Rockwell Museum yesterday, during opening weekend. What does this have to do with Harvey comics? Well, back in 1980, Hanna-Barbera produced the first Richie Rich animated cartoon. There was a production animation cel of Dollar the Dog from the show and a beautiful piece of presentation art hanging in one of the rooms.

While I was there, I was also able to hear the lecture by Dave Nimitz about collecting Hanna-Barbera toys, and to speak with him at some length after the lecture. One thing he said particularly resonated with me. He said that fellow collectors needed to know what was out there. His solution is that he is working on a book. You, my readers, should know that I have been saying the same thing about Harvey Comics merchandise, and that my solution is, of course, this website.

In other news, there has been a delay in the Toy Bloggers United contest due to one of the winners not claiming their prize. I will post again when there is more information.