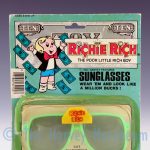 I was going to post something different today, but posting the Larami Old Timer Cars to the new Harvey Mercheum Facebook page made me nostalgic for rack toys. I have not had time to take pictures in a while, so I went through my backlog and found something I thought I had already posted, one of the scarcer items in the permanent collection. Today we examine the Richie Rich Sunglasses by Larami!

I seem to remember that during summer in my childhood (the 1970’s), you could walk into the local drugstore or five-and-dime store and there would be a revolving rack of children’s sunglasses. They were all plastic, including the “shatterproof” lenses, and brightly colored. There would be small molded plaques on the bows, up by the hinge, with the names and logos of popular children’s characters. I always wanted a pair, but could not use them because I was already wearing prescription eyeglasses. Then there was a news story about some poor child who stared at the sun too long while wearing one of these pairs of sunglasses and suffered eye damage. It turns out that while the lenses were shatterproof, they had no UV protection. The racks immediately disappeared from the stores.

The funny thing is, I cannot seem to find any mention of this story anywhere. Did I imagine the whole thing? It is possible. Regardless, when I started collecting Harvey comics merchandise, I expected to find sunglasses. When I did not, I assumed that they had never been produced because of that recall. Imagine my surprise when I found these, from as late as 1983! There is the molded plastic plaque, on the top bar not the bow, and the backing card mentions “safe shatterproof lenses” but no mention of UV protection. And speaking of backing cards, these would have hung from a pegboard with other Larami rack toys, not on a spinning rack like I remember, but close enough!