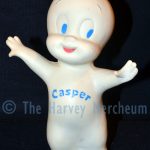 I was going to continue my tribute to summer with another inflatable toy, but I am very pleased to announce that I received five guest exhibits contributed by new friend of the Mercheum Jim Rash. I have said before how a number of pieces of Harvey comics merchandise would appeal to a variety of collectors, and today’s exhibits are proof. Jim is a long-time collector of vinyl figures. He and photographer Jameson Scott published a book about them, Cartoon Figural Toys.

The five figures exhibited today were made by the Hungerford Plastics Corporation. Hungerford was probably best known for their Peanuts gang figures from 1958, but also made these Harvey figures in 1959 in conjunction with the debut of Matty’s Funday Funnies on ABC-TV. Jim was kind enough to send along this Hungerford advertisement:

The figures were originally sold in plastic bags with cardboard header cards, and I have noted that on the exhibit pages. Hungerford made a total of six Harvey character figures. According to Jim, the sixth was a smaller Casper, seven inches tall instead of nine. Why they made two of Casper, and so close in size, I do not know. I say close in size because Jim says Little Audrey is fourteen inches tall! A seven inch and a fourteen inch Casper I could see, but seven and nine? Jim no longer has this smaller Casper, but the other five figures exhibited today are the ones shown in his book. It is a pity Hungerford did not make Buzzy the Crow.

I am very grateful to Jim for taking fresh pictures of his Harvey figure collection and sending them to me to share with all of you. If you are interested in collecting vinyl figures, please consider ordering a copy of Jim’s book. And remember, if you have any Harvey comics merchandise you would like to see exhibited here on the Harvey Mercheum website, use the Contact the Curator form to let me know!