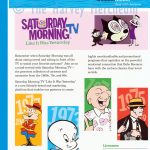 I frequently feel like running the Harvey Mercheum is a lot like juggling, trying to keep many balls in the air at once. It turns out that I am a terrible juggler. It has been almost three years since I last did a “Harvey corporate” post! I really must apologize. Today we go from the cut-and-pasted mock-up of an advertisement for Little Audrey to some slick advertising pages Classic Media did for their characters back in 2004:

I am putting my personal favorite character, Richie Rich, first:

On the back of Richie, we have Hot Stuff the Little Devil:

Casper is a marketing powerhouse, appearing on the cover page above, and then holding down the front and back of a page with help from Wendy the Good Little Witch:

In 1993, under Jeffrey Montgomery‘s reign over the Harvey empire, Harvey released an Underdog comic. Here is the advertisement for Underdog:

One thing I learned while putting this post together was that in 1958, Harvey Films (the animation arm of Harvey Comics) acquired the rights to Betty Boop from Paramount Pictures, Inc. Here is the advertisement for Betty Boop: