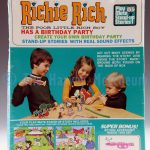 Well, another birthday in the books, but today I am continuing the celebration by posting one of the most recent acquisitions for the permanent collection. I did not even have this item on my want list, because it is so rare, I never thought that I had a chance at owning one. Now that I own it, I would love to rip it open and play with it!

Today’s exhibit is the “Richie Rich Has A Birthday Party” play set from RGI-ATHOL’s “Play-Mate Stand-Up Stories” line. What an amazing piece of marketing! We have some printed cardboard and a cheap plastic whistle, and yet you would think you were getting something Richie Rich would be jealous of. In several spots, we are assured that the party is “with real sound effects”. Unless it is the sound of children screaming after getting paper cuts from the cardboard, this can only refer to playing the included whistle. And it is not just any whistle, no sir! It is a “SUPER BONUS! ACTION ACCESSORY INSIDE THIS SET PLASTIC PARTY WHISTLE”! No lower-case letters for RGI-ATHOL, they saved them for the back of the box, where we learn that “Each guest to Richie’s birthday party gets a special animal whistle as a prize like the one inside.” Animal whistle? If you look closely at the picture on the front, I guess the open end of the whistle bears a vague resemblance to Donald Duck. Thanks Richie! You couldn’t fill a sack with gold bars or gems or something? A knock-off Disney whistle? Next year I’m going bowling instead of attending your crummy party!

Two important points about this exhibit: 1) this is the first exhibit to feature Little Lotta! Welcome Lotta to the Harvey Mercheum! and 2) on the back, above the almost Japanese woodblock print landscape, there is a list of sets available at the time. Notice the first, #401, is “Casper the Ghost“! I know it is a long shot, but if any of you, my readers, have the Casper the Ghost Play-Mate Stand-Up Stories, or know of one for sale, please use the Contact the Curator form to let me know!