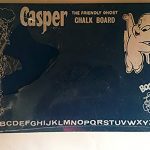 Pop culture historian Mark Arnold and I were recently discussing children’s chalk boards. Mark let me know that one had been made for Casper in 1959, and provided this image:

1959 was of course a great year for Harveyana, because of the debut of Matty’s Funday Funnies on ABC-TV. We have already seen the vinyl figures Hungerford released that year. Mark claims the Casper chalk board was made in blue and black. If any of you, my readers, own one, know of one for sale, or have any additional information about these chalk boards you would like to share, please leave a comment below!