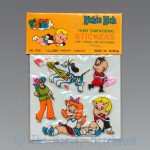 So here we are, starting March, and I have only posted two new exhibits this year. That has to be a record low. To help, I am posting two exhibits today, more examples of the number 998 short Richie Rich Three Dimensional Stickers. They both feature the orange hanger we saw last time, which was almost a year ago!

The first set features Dollar the Dog fetching the newspaper. Dollar was a loyal companion to Richie, but I don’t recall him ever playing fetch:

The second set is even funnier, depicting Nurse Jenny shoveling. Did she lose a patient and now she is trying to dispose of the body without anyone noticing?