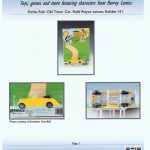 When I first started designing the Harvey Mercheum website, I wanted the exhibit pages to be as distraction-free as possible, which lead me to remove the sidebars. I also wanted the pages to be printable. Even without sidebars, I was not happy with the output from the Internet browser File->Print, so I investigated options. I found the WP-Print plugin and have been using it since the website launched in 2014. The output originally looked like this:

Some time in 2015, an update changed the output slightly:

In 2016, the update to WordPress 4.6 caused problems with the images being left-justified instead of centered. I was eventually able to come up with some CSS rules to correct the problem, but the Gutenberg update brought it back:

I finally decided that enough was enough. Inspired by the success of my JA-RU rack toys white paper, I decided to redo the exhibit printouts as Portable Document Format (PDF) files. I reformatted my new Harvey Mercheum letterhead with mirror margins for 3 hole punching. The first exhibit printout now looks like this:

It will take time for me to go through all 130 exhibits and hand craft PDF files, but I think it will be worthwhile in the long run. What do you think? Leave a comment below, or use the Contact the Curator form to let me know!