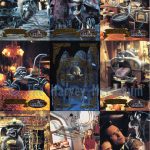 So, some good news and some bad news today. The bad news is that yesterday morning I dismantled the second public display of part of the Harvey Mercheum permanent collection. It was on display at the main branch of the Schenectady County Public Library (SCPL) for the month of August. I am very grateful to the library for allowing me to share my collection with the public, and hope to do so again.

The good news is that the Harvey Mercheum has a new guest contributor, Rick Beckham! Rick collects books, especially Scholastic books from the period when they used their own book numbering system, starting in 1953 when the company began printing paperbacks under the TAB label and lasting until they started using International Standard Book Numbers in 1979. Rick has also collected Harvey Comics since the 1980s. He reached out to me using the Contact the Curator form, and has sent me some interesting Harveyana to share with all of you!

The first item I am sharing is part of the huge amount of merchandise produced for the 1995 live action Casper movie. We have previously seen the Casper Bendables figure by Tyco, the Casper keychain by Dakin, and the Casper Moisturizing Bath Soap by Rovar. Fleer produced a set of trading cards for the movie, using almost every trick in the book to increase revenue from the set. They made the set of 119 cards in both regular and “Ultra” editions, they made a set of four hologram cards, and they released a promotional uncut sheet of nine cards. The only trick I can think of that they did not employ was to produce a binder to keep the cards in. Rick sent me scans of the uncut sheet: