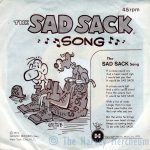 Long before Harvey Comics partnered with PolyGram to produce records, Harvey made their own. With lyrics composed by their own Sid Jacobson along with Jimmy Krondes, performed by “The Comix”, and copyrighted “Harvey Music, Inc.”, the songs were pressed into 45rpm records copyrighted “Harvey Records, Inc.” There were ads in the comic books you could cut the coupon out of and mail away for them, you can see one here.

They came in bagged sets, two comic books and one 45rpm record. There are two of these sets in the permanent collection. The first is from December of 1972, and features Casper and Spooky #2 and Richie Rich Jackpots #2:

The second is from January of 1974, and features Richie Rich Jackpots #8 and The Friendly Ghost, Casper #171:

Apologies for the quality of the scans, my old scanner was legal size but my current scanner is only letter size.

If you have any other bagged sets with records, please leave a comment below, or use the Contact the Curator form to let me know! Many bagged sets without records exist, and several are in the permanent collection. I am not planning on featuring the bagged sets as exhibits here on the Harvey Mercheum website because I feel they should be listed in the Grand Comics Database.

A couple of things to note on the two bagged sets. First, the older set has a stapled cardboard hanger, and the newer has printing on the plastic with a reinforced hang hole. Second, the older set has a nice cartoon printed sleeve on the 45rpm record, and the newer has a plain white sleeve. Did they run out of sleeves before they ran out of records? And finally, the older set has a cardboard card with the song lyrics printed on it. The newer does not have this card. Again, did they run out? They both seem to have the same record, with Richie Rich on one side and Casper on the other, which fits with the comics in the set.

Today we have another guest exhibit from Rick Beckham, the Sad Sack and Wendy 45rpm record: