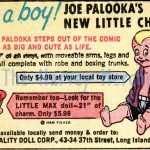 Today we continue Rick Beckham’s scans of advertisements for Harvey merchandise with a total of nine from the 1960’s. We start with two from February of 1960:

We have yet another piece of Joe Palooka merchandise that I have never seen before, and the Spooky Karbon Kopee Kit. I am very excited to see the second advertisement, because part of this kit is in the permanent collection. I have not posted it as an exhibit yet because it is only part. Next we have three ads from February of 1961:

The first ad shows four toys by Saalfield, the company that made the kites. I have seen these toys for sale, but in poor condition or with high prices.

Next we see two toys from Mattel, including the Casper Music Box Rick provided that we saw back in December. Next to that, we have the Gund hand puppets. When I posted Katnip several years ago, I mentioned that I thought I saw an ad for the puppets. Here it is! So now we know which characters were made in addition to Katnip, and yes his partner Herman is one of them.

The last ad from 1961 is for the Casper the Friendly Ghost Game that I posted in the first year of operation of the Harvey Mercheum website, made by Milton Bradley. I have no idea why the ad says “Spook Board Game”, the box does not contain that text anywhere, as you can see from the photos in the exhibit.

Moving ahead to February of 1963, we have a Casper Electronic Adventure Game by Tarco. I have never heard of Tarco, and never seen this toy. It looks amazing! And then Casper gets a “Color Television Set”, with eight rolls of color film, because that is how television works. It is probably similar to the Richie Rich Video Set, which I am still looking to acquire for the permanent collection. And finally we have Mattel again, with the addition of the Casper talking doll. I see these dolls for sale all the time, but again they are either dirty and broken or extremely expensive.

We conclude the 1960’s for now with an ad from February of 1965. This is the Sawyer’s projector that would show the “story cards” in the Casper Tru-Vue Magic Eyes Story Set. I would be very interested in acquiring one of these for the permanent collection. Next time we will visit the 1970’s!