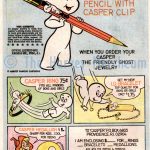 Today we conclude Rick Beckham’s scans of advertisements for Harvey merchandise with a total of thirteen from the 1970’s. We start with two from 1972:

I have not seen any of that Casper jewelry, but we have talked about the Harvey records before. So now we know that of the five records made, the Richie Rich and Casper record was released first. It is interesting that the ad says you get one Casper comic, not the two we have seen in the bagged sets.

The first ad we have seen before. Then we see that the Sad Sack and Wendy record was the second record released, with two comic books, and if you order the Casper and Richie Rich record, you now get two comic books instead of one. Also note that the June ad says that Harvey plans on releasing a new record every two months, but by November, they have only released one more record, Spooky and Little Audrey. Moving on to 1974:

The next record released has Casper and Richie Rich together in one song, with Hot Stuff on the other side. After that is Sad Sack and Nap Sack on one side, with Baby Huey on the other. That is the last of the records Harvey made. The next ads are from 1975:

Casper gets a ton of merchandise, and we finally get to see the ad for the plastic belts! I am still looking for the Richie Rich belt for the permanent collection.

In 1976, we see the whole line of Harvey records, now being sold as a set. We close out the 1970’s with my personal favorite ad:

I love the Big Money game, and have one in the permanent collection. I still have not figured out how to best photograph board games, but when I do, I will certainly create an exhibit for this game!

Many thanks to Rick for these scans, I need to continue his work and look through my own comic book collection to see if I can find any more ads. Next up, more guest exhibits!