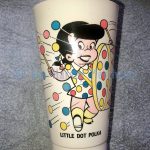 Today we have photos of four very neat plastic drink cups provided by Paul Merolle. I really wanted to make these exhibits, but Paul says he is not sure they were ever produced, so I am counting them as prototypes and sharing them with you, my readers, as a Harvey corporate post. Paul says they are from the 1970’s, and were made for a chain of convenience stores called UtoteM. He thinks they were made by the same company that made promotional Slurpee cups for 7-Eleven. Long-time readers of the Mercheum blog know that 7-Eleven is near and dear to my heart, because in the early 1980’s, my father and I used to walk to our local 7-Eleven at least once a week to see if any new Richie Rich comics had come out.

The first cup Paul shared with me shows Little Audrey cleverly feeding several cats at once:

The next cup features Little Dot:

The final cup is why I really wanted to make these exhibits. It would have been the first item to feature Stumbo the Giant:

My thanks to Paul for sharing these wonderful items with us. More to come!