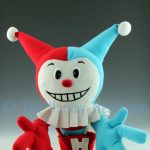 I am still recovering from TerrifiCon, but I did want to mention a small update I made to a character page.

There was some discussion recently on the Harvey Comics Facebook group about Harvey’s mascot, who I have referred to as Joker. Jerry Beck worked for Harvey from 1993-4, and said they referred to the mascot as “HA-HA”. He researched this name, and found an advertisement on page 184 of the April 15, 1962 Boston Globe newspaper promoting the appearance of Casper, L’il (sic) Audrey and Ha Ha Harvey, the Court Jester:

The text next to Casper reads, as best as I can decipher:

“Casper, The Friendly Ghost, popular TV cartoon character, will bring his friends L’il Audrey and Ha Ha Harvey, the Court Jester, to Northshore on Father’s Day for a morning and afternoon of fun and hilarity. Bring the youngsters to see their TV favorites.”

Of course, by 1962, Beany and Cecil had replaced Casper and Audrey on Matty’s Funday Funnies, but children would still remember them. Northshore Shopping Center is now Northshore Mall.

I have renamed Joker’s character page and his doll exhibit, which was very popular at TerrifiCon. Thank you Jerry for allowing me to share your research!